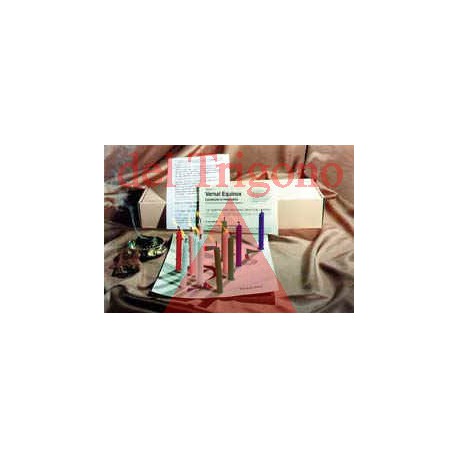 The shares of Equinox Festival

The Festival of the Equinox is one of the most complete, its propitiatory actions relate a bit 'all areas of life: love, home and family, money and labor. The execution is very simple and affordable for everyone. You can choose up 6 actions among the nine listed below.

Beware the Spring Equinox Festival is celebrated on the evening of March 21, however, when it is impossible or professionals who would perform many rituals for their clients, can still be run, with the fullness of the results, within a maximum of midnight April 2.

A) Ties of Love
1) Relationship to person new favorite.
The Festival promotes the transformation of a mere acquaintance or friendship in an official report. The aim is to propitiate the beginning of a new romance with a person chosen by those who are running. This, in the simplest terms, is the classic fascination of love to encourage the attentions of the man or woman you want. This is one of the most desirable actions and desired by all who draw near to the esoteric world to realize a dream of love.

2) Consolidation of an existing report, prevent betrayal.
As well as with new people, the festival promotes the consolidation and protection of an existing relationship. Great to prevent the end of a love, rekindle the desire and passion, prevent betrayal. In addition, the festival is also suitable to formalize an existing bond, so that it is accepted by everyone (family, friends, rivals, former, parents, etc.) To put an end to a period of doubt, of uncertainty, of subterfuge or crisis . It will also propitiate the achievement of a formal engagement condition, marriage, recognized cohabitation, etc., Or simply keep alive and passionate romance.

3) To propitiate the end of a story
The Equinox Festival has a very comprehensive action, unique in that, if you want to start a new romance, and you want to put an end to the old one or you want to free the person you want to be a relationship that is in the process , the auspicious festival separation according to requests made.

4) Action on apotropaic couple
Free from all negative actions performed by other people rivals or enemies against the couple. He rejected the sender all the negative thought forms (commonly called bills, envy, evil eye, etc.) Generated at the expense of the couple.

B) Home and Family
5) Auspicious family peace.
The Festival has a positive action on the family crisis, facilitates the smoothing of tensions, misunderstandings, suspicions, harshness of character, hostility, grudges involving the couple and family members in the broad sense, ie including more or less close relatives with which coexists or with whom you have frequent opportunities to meet.

6) Protect your home and family.
The Festival is protecting the home and family from negative attacks also longstanding. also it protects against rivals, betrayal, slander. Propitious removal of unwanted or dangerous persons. This protection lasts a full year from the date of execution of the Festival.

C) Equity, money, work.
7) Equity.
Protects and does go forward at any field of their rights so that they are officially recognized and authoritative information, regarding ownership, beneficial ownership, inheritance, company shares, and anything else that, Although the task of law to those who run the festival, risks not be recognized in an official way and lend the side scams, oppression and deception.

8) Money.
Protection official recognition of a debt by the debtor, that can be a debt of money, but also lent a favor, an acquired right and so on.

9) Work.
It protects the workplace against dismissal risks. This Festival is also very useful to promote the official recognition of a job, that is for those who want to get out of a black working condition and wants an official and legal recognition of their work.

AUTOMATIC ACTIONS.
It is of purification actions and liberation by the negative forces of any type concerning who performs the Festival. The periodic purification brought about by the Calendar Celtic Festival is extremely important for the spiritual evolution and the path on the way of the initiatory knowledge.

No customer reviews for the moment.